Fatehabad city lies in the district of Fatehabad in the Indian state of Haryana. This city is also a municipal committee. In 14th century, Firoj Shah Tuglak established the city of Fatehabad which eventually derived the name from his “Fateh Khan”. Sirsa, Ratia and Barwala cities are some important cities which are located in close proximity to Fatehabad.The various excavations performed here have disclosed some exciting facts that enlighten about the rich cultural heritage of India. 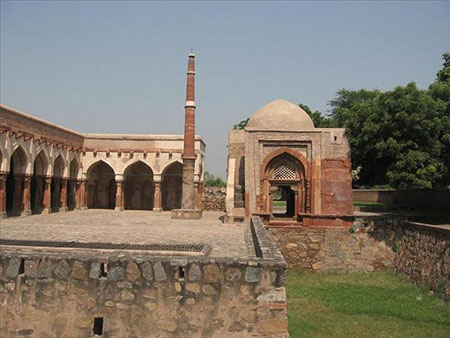 Fatehabad Lat or A Stone Pillar

Fatehabad is a land of rich historical legacy. It has witnessed various chapters of Indian history. The region saw the advent of Aryan Civilization which subsequently spread to other parts of the Indian Subcontinent. In the beginning Aryans were spreading out starting from the Drishadvati and Saraswati rivers. During this time they also covered a broad area of Fatehabad and Hisar. The area came under the monarchy of Pandavas and their descendants. As per the “Puranas”, the regions of the district of Fatehabad once formed part of mighty Nanada Empire. Later the Ashokan pillars which were discovered at Fatehabad and Hisar are evidences which confirm that these areas of Fatehabad continued to be a part of the Mauryan Kingdom. Thereafter, in 1798 Fatehabad was under the control of Maratha rulers. Later in 1803, the British conquered the Marathas and ruled the place. In the year 1923, the sub-tehsil of Tohana got shifted from Fatehabad to the tehsil of Hisar. In 1972 the sub-Tehsil of Tohana was promoted to Tehsil. On 15th July 1997, Fatehabad was declared district and at present it has 3 sub-divisions, 3 sub-tehsils and 3 tehsils. Read More...................

Fatehabad is positioned at 29.52 degrees in the North and in 75.45 degrees in the East. The average elevation of the city is approximately 682 ft or 208 m. Fatehabad is situated in south western portion of the state of Haryana. The city is encircled by Jind district in East, Punjab in the North, Sirsa district and Rajasthan in West and Hisar district in the South. The district occupies an area of 2520 square kilometers. Fatehabad experiences tropical climate which means the summers are extremely hot and winters are chilly. In summers the minimum temperature remains around 21 degree Celsius and the maximum temperature touches 47 degree Celsius. In the winter months the temperature drops down to 3 degree Celsius. The city receives an average rainfall of 400 millimeters.

According to the census of the year 2001, the city’s population was 59863. Females constitute about 47 percent of the total population, whereas the males constitute 53 percent of the populace. Female literacy of Fatehabad is 60 percent, while the male literacy is around 71 percent. The population that falls in the category of below six years age is 14 percent. Since Punjab is the adjacent state of Fatehabad, the city gives shelter to a large number of Jat Sikhs and Kamboj Sikhs. Punjabis belonging to the Western Punjab, who spoke Saraiki language and migrated in Fatehabad in 1947, are considered to be the most powerful community in the city. 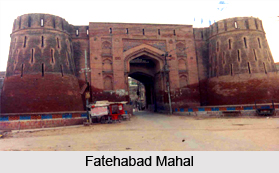 There are numerous places of attractions in and around Fatehabad. Fatehabad was ruled by the Mughals and during that period the place was reckoned as one of the major kingdoms. The famous mosque in Fatehabad known as the “Humayun Mosque” was built by Humayan during that era. The mosque adopts the Mughal style architecture. The “Kunal Mound” is another historic place located in the vicinity of Fatehabad. This is also an ancient archeological site of Haryana. “Stone Pillar” or Lat which was constructed by Ashoka is also located near Fatehabad which is a famous tourist attraction. Another must-see spot in Fatehabad is the “Banawali Mound” which is just 15 kms away from the city of Fatehabad. Read More....................

The infrastructure of Fatehabad encompasses the condition of electricity and power supply in the city and agriculture. The Electricity Board of Haryana has been providing electricity to all the villages of the Fatehabad district since the year 1970. There is also a unique program under which the electricity board caters to the economically deprived and backward sections of the area. A MOU has also been signed with an American Firm to establish a 1000 megawatt thermal power project at the nearby Hisar district. Another thermal power project of 1200 megawatt has been set up in a village named Khedar, in the Hisar district situated close to Fatehabad.

Fatehabad is outfitted with proper marketing facilities. The city houses around seven regulated markets along with fifteen sub-yards. Moreover, all the major points have been provided with appropriate storage facilities. In 1984, the “Chann Agriculture Works” was established which is currently the major industry in Fatehabad which manufactures and supplies Agricultural machinery throughout the state of Haryana and in Delhi and Rajasthan.

The numerous excavations conducted in and around Fatehabad reveal that the place had a connection with Harappan culture. Mughals had also ruled the place for a long period of time. Punjabi culture is the predominant culture which prevails in the city. Punjabi folk dances like Gidda and folk songs embellish the festivities. Fatehabad also possesses the craft tradition and is maintained by the village women who weave “Duris” or carpets in exclusive patterns. Pottery and embroidery are also very famous in Fatehabad. Beautiful leather shoes (also called “Jootis”) crafted by local craftsmen is another specialty of Fatehabad. Holi, Baisakhi and Diwali are the main festivals that are celebrated with immense fervor in the city. Hindi, Punjabi and Bagri are the major languages that are spoken in Fatehabad.

Haryana is also known as the cattle-rich state of India. Being located in Haryana, the city of Fatehabad also abounds with milk products. The locals enjoy vegetarian cuisines and do not use artificial flavors in their food preparations. All the delicacies are consumed fresh and are delicious as well as full of nutrition.“Roti” is reckoned as the staple food of Fatehabad. These rotis are either made of “Baajra” or “Wheat”. Rajma or the Kidney Beans is also consumed with rice and is included in the menu quite often. “Baajre ki Khichri” (made of Baajra and rice) is a wholesome dish which is consumed almost daily in every household. People are also fond of “Mixed Daal (made with a mixture of a number of pulses) and “Bathue ka Raita” (made of yoghurt and Bathua leaves). Another side dish is “Kadhi” which is served with rice and is quite popular here. “Lassi” is a popular drink in Fatehabad which is made of yoghurt and is consumed daily in every household. Butter and Ghee are prepared at home and are incorporated in the daily diet. The other milk based sweet dishes include- Kheer, Gajar ka Halwa, Sherbat and Rabri.

The city of Fatehabad is well-connected with the major towns and villages of the district as well as with the important cities of India via road. The NH 10 links Fatehabad with Punjab and Delhi. The city can be easily approached from Chandigarh (226 kms) and Delhi (230 kms) via road. Railway lines have not been set up in Fatehabad city yet. The Bhatinda Railway Station is the nearest rail head which is located 103 kms away from Fatehabad.